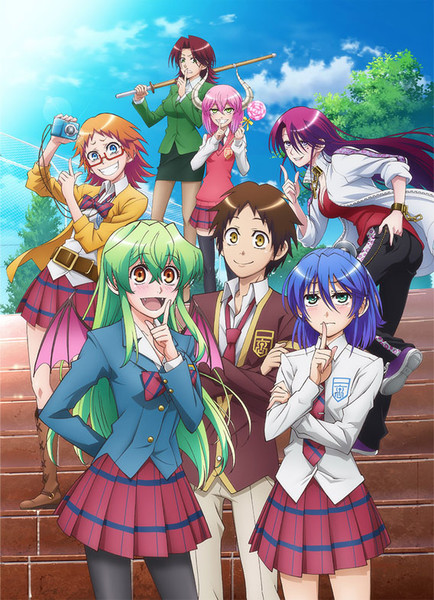 Yōko Shiragami voiced by: Yu Serizawa
Asahi Kuromine voiced by: Natsuki Hanae
Nagisa Aizawa voiced by: Inori Minase
Mikan Akemi voiced by: Reina Ueda
Shiho Shishido voiced by: Aya Uchida
Akane Kōmoto voiced by: Mao Ichimichi
Akari Kōmoto voiced by: Emi Nitta
Okada voiced by: Daisuke Hirakawa
Sakurada voiced by: Wataru Hatano
Shimada voiced by: Hiro Shimono
Shirō Shishido voiced by: (No clue yet)
Official website: http://jitsuwata.tv/
Synopsis: Asahi Kuromine, a normal high school student who supposedly cannot keep a secret, he learns an important secret. His crush, Shiragami Youko, is actually a vampire! and that she is only able to attend a normal school on the condition that no one discover her true identity, lest her father drag her back home. This secret becomes difficult to maintain, as Yōko herself is an airhead and Asahi's friend Mikan keeps bullying the two of them.
Later on, he discovers more who pose a challenge, can he keep her secret? (Scource MAL/Wikipedia)

Masich Comment: I dislike 3 characters designs already+Asahi voice+The OP&ED, but I can ignore that. I will never stop loving this series! (as manga that is) But I do hope I don't have to drop this by further choice of voices or anything.
P.S. I have no idea how to fix that character image spread sheet (It was the onlyone I could find) + honestly non has a clue on who voices Shirō Shishido (Searched for 45mins).

Sempai
QUOTE (Masich @ Jul 06 2015, 09:17 PM)I dislike 3 characters designs already+Asahi voice+The OP&ED, but I can ignore that. I will never stop loving this series! (as manga that is) But I do hope I don't have to drop this by further choice of voices or anything.Sadly Enough... I am dropping this, to many voices sound completely different from what I imagined.

I do enjoy the manga till this day!! It is three times quicker in progress compared to Nisekoi!!! That Says Enough!
In the end... a Failure of an Anime Adaption for me... But it will not ruin one my favorite mangas!