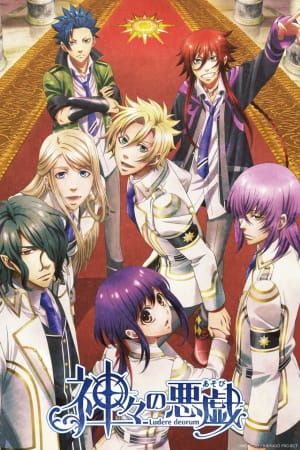 Synopsis The heroine, Yui Kusanagi, is the daughter of a Shinto shrine. She discovers a mysterious sword, which transports her to a different world where she meets the Greek god Zeus. He invites her to attend a school in a separate world that he created. Zeus intends to teach the meaning of love to the various young divine beings who also attend the school, in an attempt to reverse the weakening bond between humans and the gods.

Well...first of all, I had originally blacklisted this anime, due to the fact it comes over as something for girls, (looks at Visual Novel), Yepe, definitely for girls.

However...*Strange but Honest*, after the first 3 episodes, you get the character focused episodes, with that I mean 1-3 gods in 1 or a few episodes, in which as you can guess, you get information about their lives and personal history, which is mainly important for the whole story/plot.
During those episodes it feels like I am watching Amagami. Of course compared with that 1, this is about 1 girl and a bunch of male gods and no real ending (So far), instead of 1 guy and a bunch of girls with a lot of endings.
Overall: The characters are very well chosen, some have their... creepy moments.. as I would call it, but also a lot of comedy in the form of embarrassment and awkwardness.

I don't know what to think of this anime, it is nice, a bit slow, has good characters development, and no actual drama.
I will say, that from the first episode and I really mean the first few minutes, you can guess what will be the end plot of the last 1/2 episodes.
You must log in or register to reply here.
Share:
Facebook Twitter Reddit Pinterest Tumblr WhatsApp Email Share Link
Top