In the fifth part of the prequal series I will delve into the Higurashi franchise. I will start with the original that started it all, Higurashi no Naku Koro Ni that came out all the way back in 2006. The series certainly left a mark with its style of horror and gore but behind the mindless violence was an interesting tale of mystery that kept us questioning right until the shows end. It is certainly a show worth watching although it is not for the faint of heart or kids. 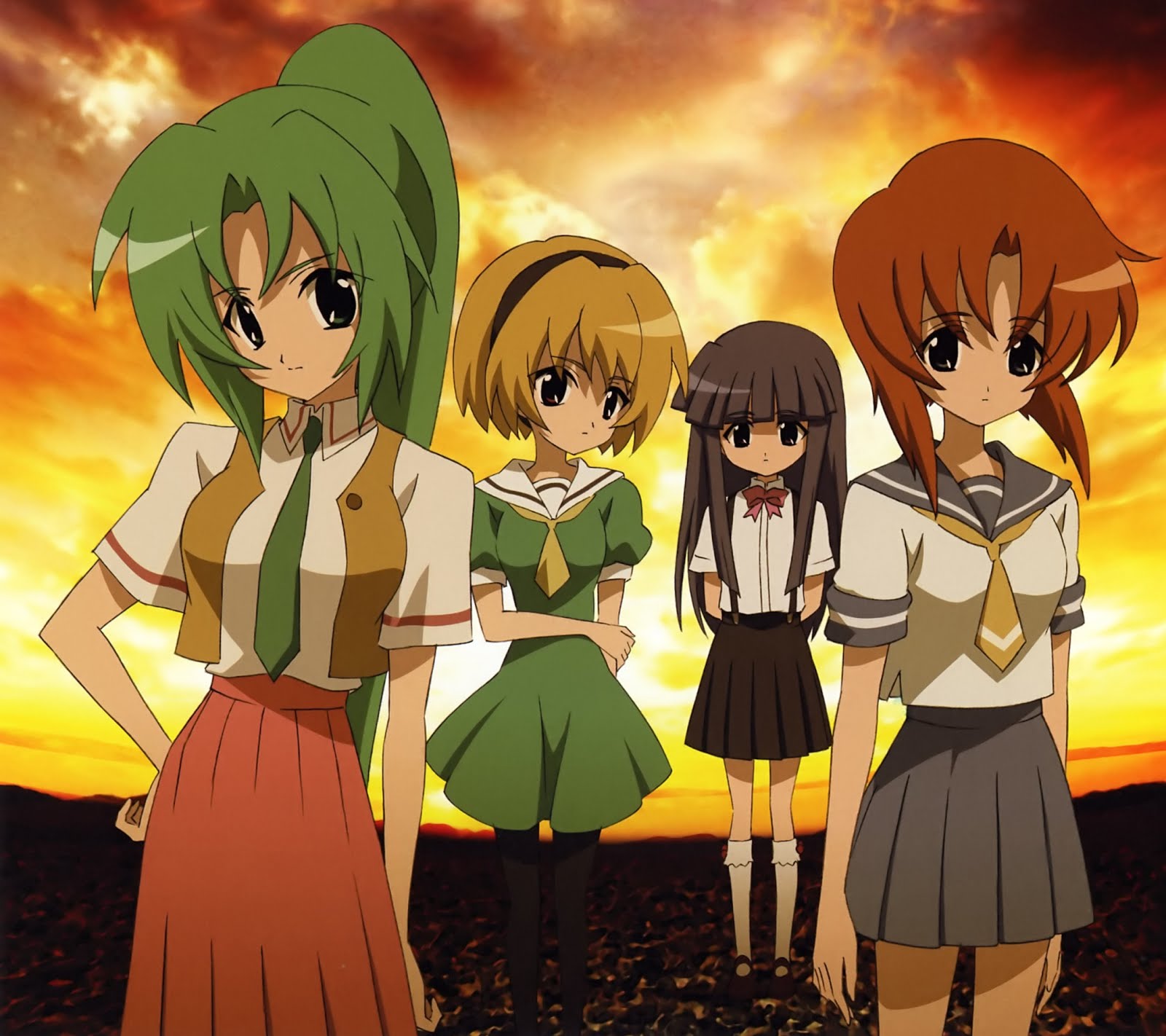 When They Cry more commonly known as Higurashi no Naku Koro ni is a mystery/horror, thriller, supernatural series which premiered in the spring of 2006. Higurashi no Naku Koro ni is the opening season of the Higurashi franchise with the anime later spawning an additional four seasons. The second “Kai" season aired in the summer 2007 whilst a shorter third “Rei" OVA season was first released in February 2009. More recently a fourth “Gou" season came out in the Autumn of 2020 whilst the latest “Sotsu" season” is currently airing in the summer 2021 season.

Based on a sound novel, Higuarashi created quite a stir in the anime community for the level of graphic violence and the brutal murders depicted throughout the shows running. This series is not for the faint of heart and is certainly not suitable for kids as Higurashi does not hold back when it comes to showing violent scenes. Indeed, there are times where it seems to even revel in those moments as it often uses violence to highlight the madness and paranoia the characters are experiencing. 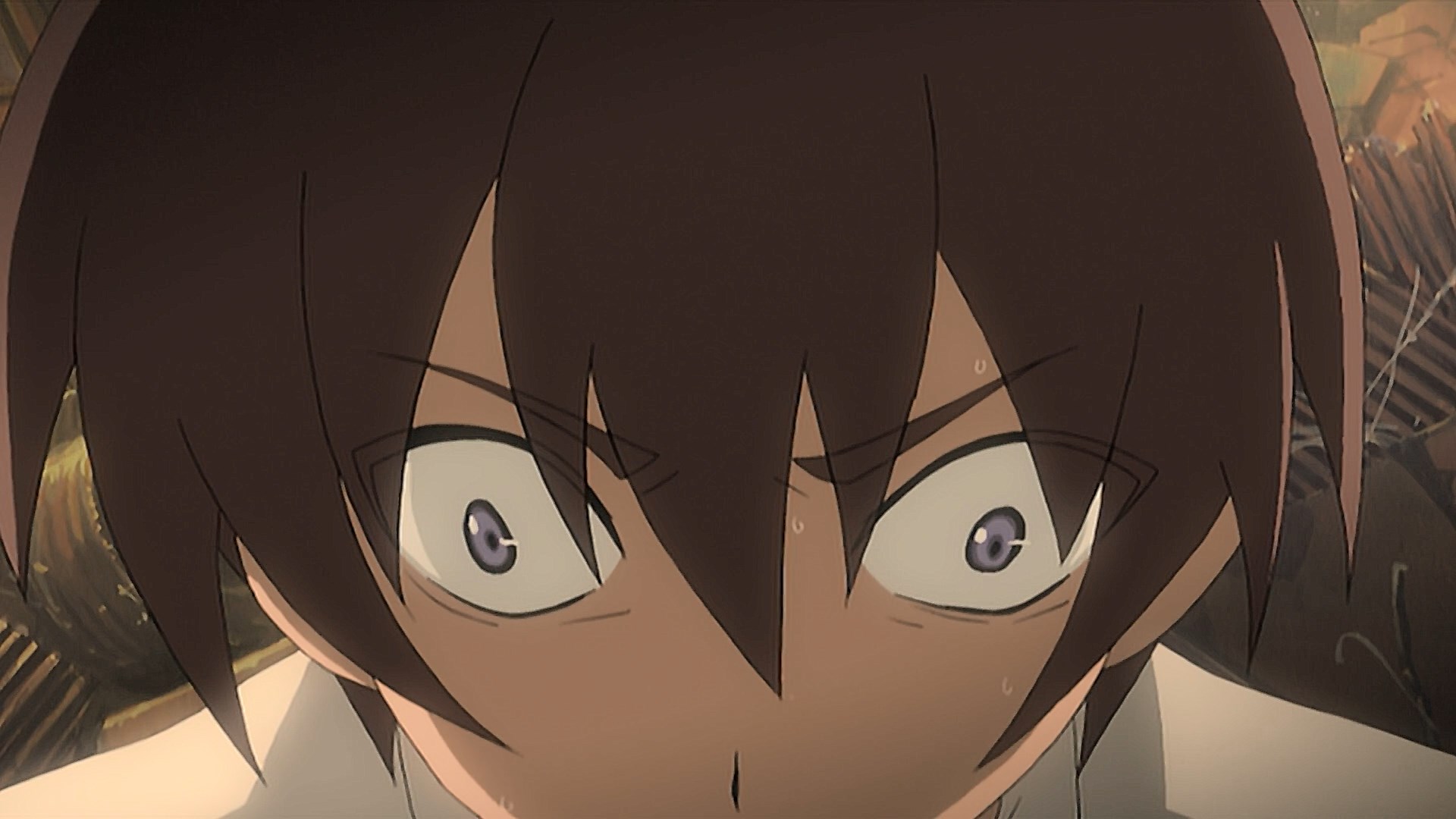 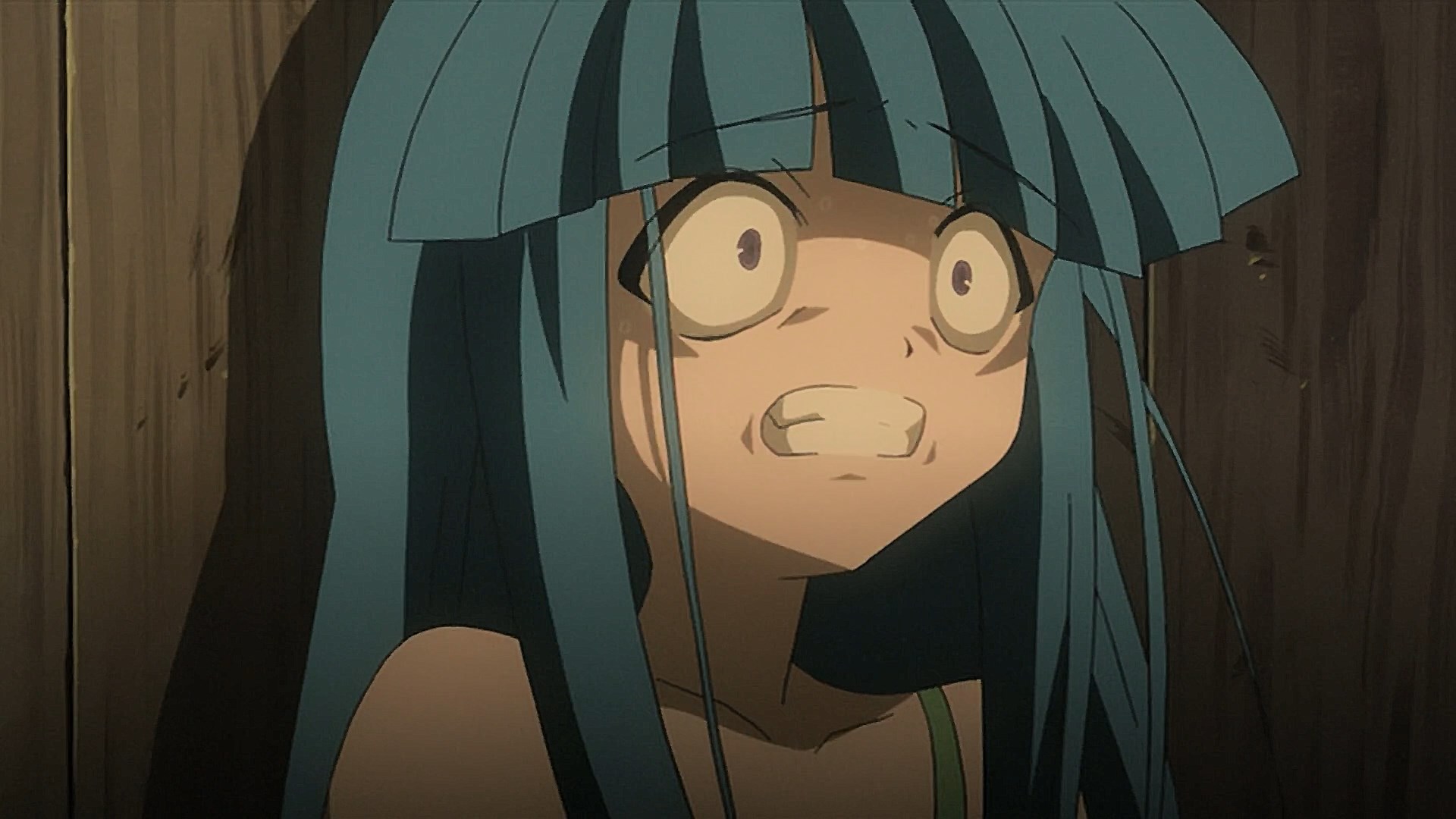 Higurashi is based on a fictional picturesque village named Hinamizawa where a young boy named Keiichi Maebara has recently moved into. He is welcomed by his classmates in his new school and invited to join the school club which consists of Rena Ryugu, Mion Sonozaki, Satoko Hojo and Rika Furude. This group will form the main cast of characters in Higurashi and they all play pivotal roles in the events that occur in the Hinamizawa village.

It is at this point where Higurashi will delve into its story but unlike most anime series, Higurashi delivers its plot through various question and answer arcs. These arcs consist of a series of episodes which focus on a particular character’s viewpoint and retells events through their eyes and perspective. The first few episodes of any given arc generate a sense of mystery and foreboding. On top of this a number of questions are posed to the character/viewer. These individual mysteries and suspense are then resolved, often in dramatic fashion, in the answer episodes.

Whilst many of these individual stories are quite different, they do share some common elements and it is these similarities that ultimately tie to the main overarching story. The most notable and prevalent mystery being the Oyashiro curse that seems to afflict everyone to some degree. The cause and trigger of this curse forms one of the biggest mystery elements of Higurashi. 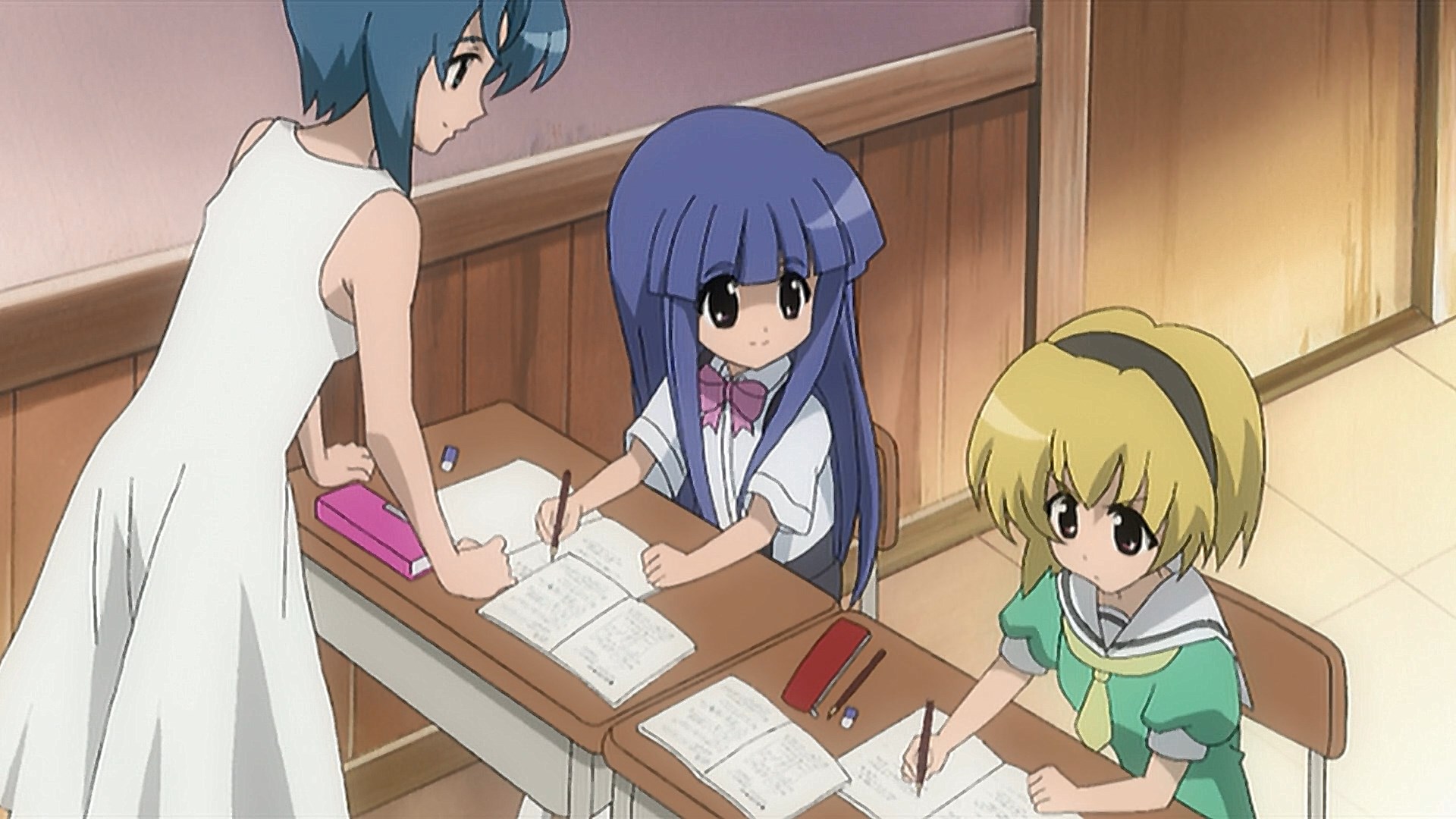 On the whole, I have to say that the way these arcs are delivered is a definite plus for the series. One of the biggest plus points in delivering the narrative in this fashion is we get the opportunity to see arcs through every main character’s perspective meaning not only do we gain a greater understanding to their background; we also learn an extra twist to the Oyashiro curse and overall story. These details often shed an extra dimension to the story and cast as those moments of enlightenment also challenge our initial opinions of the cast and even the story. These revelations all gives us a greater insight on events or why certain characters behaved in the manner they did.

This form of storytelling also has the advantage of making Higurashi an easier series to watch again as the impact of many earlier scenes seen can only be fully grasped after we have seen their accompanying character arc. This advantage is actually demonstrated in the series itself when one story is told twice but through the perspective of two different characters. If there is one disadvantage that can be said about the retelling of events, it is that this method of storytelling can lead to some repetition as some scenes will be repeated but I have to say this trap has largely been avoided as the stories told are sufficiently different that we are not subjected to this to any detrimental degree.

As a result of this well executed storytelling the main characters of Keiichi, Rena, Mion/Shion, Satoko and Rika are all devoted enough screen time so their individual backstories are told which whilst dark, aids us in understanding the decisions they make. Beyond that though our understanding or their backstory allows us to appreciate the positions they hold in the village plus what influence they may have on the curse. It is those individual character revelations that allows us to gain clarity in the stories developments.

In addition to this much of the secondary cast are also well known by the seasons end. Whilst we do not get stories for them, it is interesting to see these characters depicted in different ways depending on the story arc and the characters individual perspective. It all adds an extra dimension to the stories dynamic and keeps things fresh. 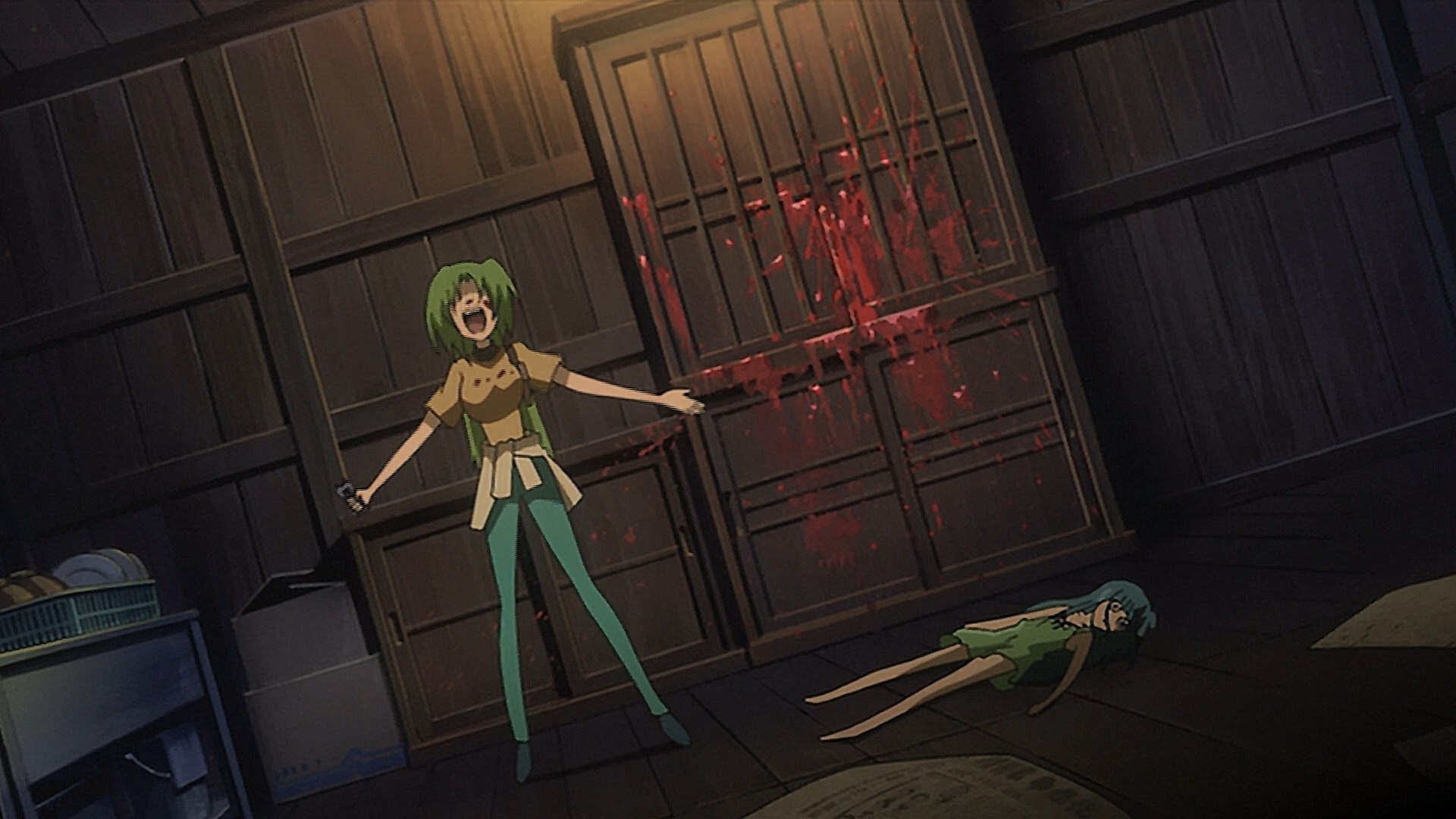 Animation wise Higurashi was never winning awards even back in 2006 and when looked at today it has clearly aged. There will be some scenes when the character models can go a bit wonky and their expression look suspect (even beyond the madness this anime projects). The song track for opening is pretty decent and is “Higurashi no Naku Koro ni” by Eiko Shimamiya whilst the ending is “Why, or why not" by Hiroyuki Oshima featuring Rekka Katakiri.

Overall, Higurashi tells an original story in an unconventional way that largely works. We get what appears to be a simple story that develops into something with depth and complexity. The mystery and suspense elements are frequently punctuated with gratuitous violence which some will wonder is even necessary. This is the primary pain point of Higurashi which can easily put people off. If you can get beyond the violence however what you will get is entertaining story with solid character development. The other bugbear that I can see bothering some is the level of animation which by today’s standard is mediocre. It is not Higurashi’s selling point but I feel the positives well allow you to overlook this shortcoming. All things considered I would recommend this series to watch for the strength of its story and characters which should keep most anime fans pleased.

Story 8 – What starts as a seemingly simple story develops into an intriguing tale of mystery and suspense as we learn more about Hinamizawa village and its various residents. This sense of mystery and foreboding is also heightened by the various characters who all exhibit unique backgrounds and personality traits. Biggest point of contention is the frequent graphic violence that is prevalent throughout the show.

Characters 8 – Like the story, the characters in Higurashi projects an image of simplicity that is later subverted when we watch their individual story arcs. They are good, for the most part but beyond the innocent façade often lies a sinister background of darkness and strive.

Animation 4 – Even in 2006 the animation was not great but now in 2021 its age really shows. The primary weakness of the show. Some scenes and facial expression can be a big dodgy. It does have a stronger opening and ending song track though.

Overall 8 – If you can stomach the violence then you should enjoy Higurashi. Its unique mix of stories and characters delivers an experience you won’t find in many other anime and whilst it is not without its flaws it is strong enough to keep you engaged. There are some loose ends and questions that is left hanging leaving the possibility of a sequel. Thankfully for fans of this series, Higurashi has those in abundance so if you like this season there are another four seasons to watch!

If you are interested there is a gallery (actually several) so check out the Higurashi gallery for season one snaps: